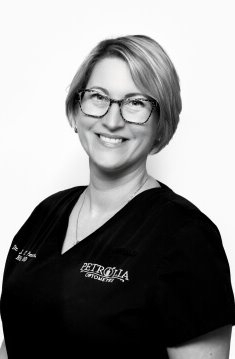 Dr. St. Pierre has been practicing optometry since 2001. She grew up on a farm in Enniskillen Township, the daughter of Charles and Emily St. Pierre. She attended Lambton Central Centennial Public School and Lambton Central Collegiate Vocational Institute (LCCVI) in Petrolia ON.

When she graduated from high school, she was awarded the Helen Kavanagh Nicol Scholarship. Dr. St. Pierre earned her Bachelor of Science(Honours Science) and Doctor of Optometry degree from the University of Waterloo, Waterloo ON, on the Dean’s Honours List, in 2001. While attending the school of Optometry, she completed a four-month ocular pharmaceutical and disease externship at Omni Eye Services of Atlanta, Georgia.

Dr. St. Pierre is committed to promoting optometric initiatives in her community. She is currently the Sarnia/Lambton-Chatham/Kent Area Lead for the Eye See…Eye Learn Program, a media spokesperson for the OAO, and a fundraiser for Optometry Giving Sight. Dr. St. Pierre Street lives in Petrolia with her daughter, Katrina, and her son, Wilder.

We recently celebrated 20 years of Dr. St. Pierre practicing optometry. Colleagues and community members left her their wishes which can be viewed here.